At around 11:30 p.m. this past Tuesday, getting off the train, I found that the katydids are all hanging out down by the railroad tracks, calling from the treetops. 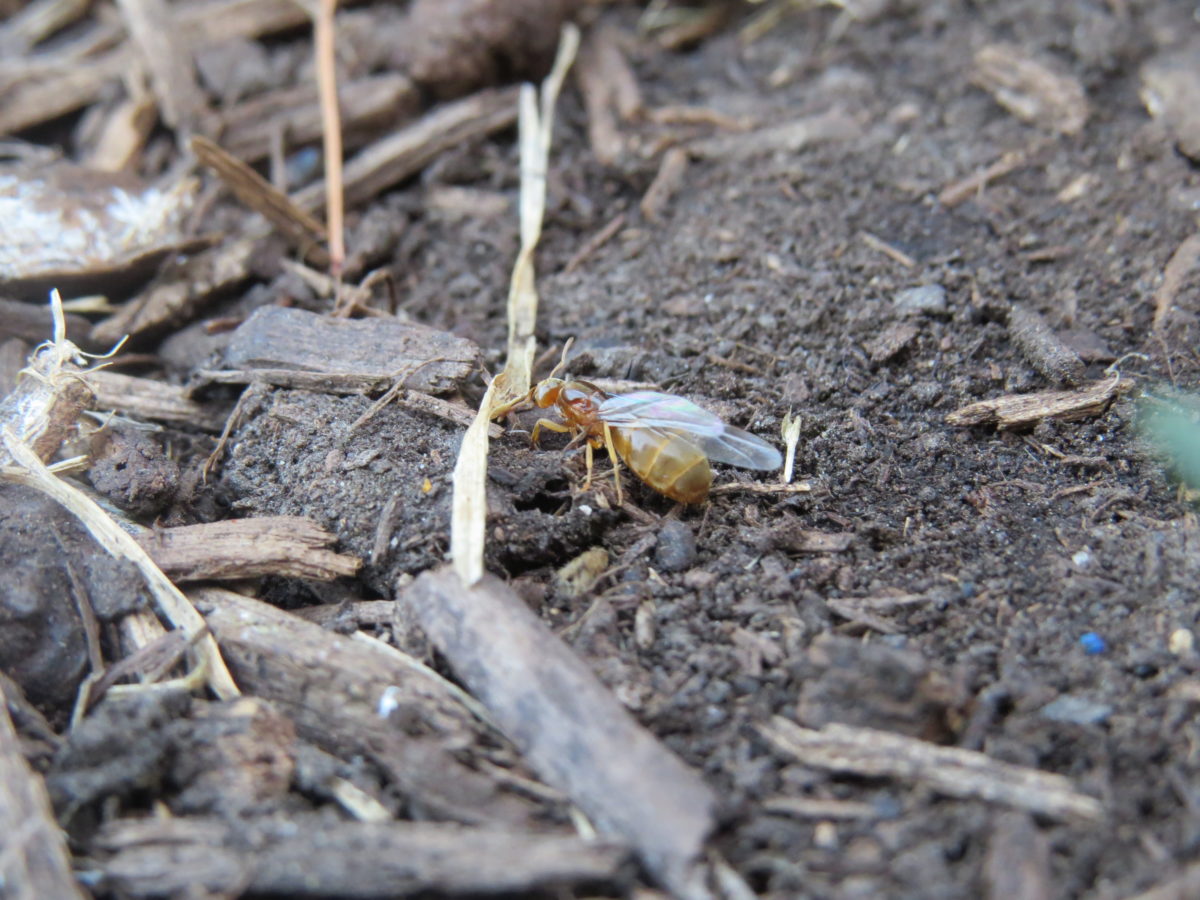 In 9 years, I believe I have never heard a katydid in my Downers Grove neighborhood. I heard them all the time when we lived in Madison, and I have heard them in Millennium Park, but never here. At around 11:30 p.m. this past Tuesday, getting off the train, I found they are hanging out down by the railroad tracks, calling from the treetops. Why should they be in Dane County, downtown Chicago, the Downers Grove train depot, seemingly everywhere else in the world, but not in my neighborhood? Perhaps they are missing something they need here. Perhaps someone is eating them up along the residential roads. As I walked away from the train station, chatting with a friend who happened to be on the train as well, the katydids faded out behind us. They hardly penetrated into the neighborhoods. By the time we reached Lincoln Avenue, I could no longer hear them.

I dreamt that night that the white-throated sparrows and cranes were just coming through on their March journey northward, and Jay Sturner and I were talking birds in his living room. It was a disorienting dream to have in late August. I awoke at 4 a.m. Orion was tilting over the southeastern horizon. Tree crickets were singing. At 4:40, a cardinal started singing, then grew silent after about 10 minutes. By 5:30, the sky was starting to light up. On my bike ride in, the drive through the east woods was littered with bur oak (Quercus macrocarpa) acorn caps. Two chipmunks were fighting over one, or courting, I couldn’t tell which. Crickets were tramping off to bed, singing their final rounds. This is the sound of early fall.

The acorns on the bur oaks are still green, but developing into shooter-size nuts. The ones falling now I think are aborted acorns that the trees have given up for dead. White oak (Quercus alba) acorns are also still green, but red oak (Quercus rubra) acorns are ripe and starting to fall. Two wood nettles (Laportea canadensis) I’ve come across this week in both the East Woods and Maple Grove bear nearly spherical, translucent galls that I initially found on the fruiting stalks and thought to be berries… foolishly of course, as wood nettle produces achenes. Laura Rericha, in Flora of the Chicago Region, reports that “Dasineura investita, a gall midge, causes both globose-apiculate semi-translucent galls and pyriform-acute galls on both surfaces of the leaves.” This matches what I’m seeing (see also this report from Turkey Run State Park, Indiana: https://bugguide.net/node/view/335222). The last seeds on blue cohosh (Caulophyllum thalictroides) are bright blue. Hog-peanut (Amphicarpaea bracteata) has finally started blooming after its twining vegetative sprint of the past two weeks. White rattlesnake-root (Nabalus albus, the old Prenanthes alba) has bolted and gone from ca. 1/3 in flower to fully flowering over the past week. Giant ragweed (Ambrosia trifida) anthers are transitioning from clenched little fists to fully open and dehiscing. Joe-pye weed are in fruit, sunflowers are still flowering, burdock fruits are just sticky, not yet dispersing. Stickseed (Hackelia virginiana) fruits have just started clinging to my pants and socks on walks through the woods. In the fields and wetlands, meadow grasshoppers have started to call, climbing-black bindweed (Polygonum scandens) and dodder (Cuscuta gronovii) are flowering. Near bur-reed marsh, a red turtlehead (Chelone obliqua) is in bloom, presumably escaped from planting, not native to the area.

A clone of brownish puffballs appeared on the mulched trail west of the spruce plot in the East Woods this week. On Wednesday they were still moist inside but furry, a few towards the center of the clone dispersing spores. Pressure builds as you squeeze them, then a pore splits open at the center of the puffball and a tiny jet of spores shoots out, then flattens into a plume before it wafts away. They were covered with gnats. By Friday, the clone had gone completely to dust. Beneath a wood nettle in the spruce plot, I found an exquisite cup fungus that I haven’t identified. Reaching for it, I brushed against the wood nettle, and the back of my hand stung ferociously. My go-to plant in this case is usually jewelweed (Impatiens), the juice of which is a balm for nettle stings, but the plants have become so woody and dried out that you can not use them effectively for this any longer. Later, I popped a jewelweed flower into my mouth–the nectar spurs are delicious–only to find a tiny bee inside that stung the inside of my lip.

In Maple Grove Forest Preserve, orange mycena (Mycena leaiana) has appeared on fallen logs, and after several days of damp heat, white slime molds have erupted on the bare soil trails like clumps of white flour wetted by the week’s rain. Wild leek (Allium tricoccum) fruits are perched atop the withered calices, as shiny as black ceramic beads. Doll’s eye (Actaea pachypoda) berries have dried out, some blackened on the plants. The soil is crumbly with earthwork droppings under the skeletons of maple leaves. Buckthorn berries are ripe. A great-horned owl called from the forest on my walk through the other night, about 7:30.

Yesterday morning, Rachel and I found several cicadas dead or dying on the sidewalk as we walked to and from the farmer’s market. There were thunderstorms in early morning, and perhaps these were blown from the branches. By 7 p.m., sitting in the front yard, we could hear cicadas all over the neighborhood, and they seemed no quieter than usual despite all the mortality. Rachel suddenly pointed up at the swamp white oak along the tree. It was swarming with little insects that looked like sweat bees. They were in fact brownish-red ants, perhaps 5 mm in length, that appeared to have emerged from the canopy of our tree (though I’m not certain that is where they originated). One flew down to the top of our little free library box, sat still, seemingly stunned, then after 15 seconds regained composure and flew off. Others were doing the same on the hydrangeas, on our lawn chairs, on the table. Many landed in the soil. One I was watching on the soil under our chairs sloughed her wings off against a piece of bark mulch. I have read of ants doing this, but I’d never seen it before. Rachel and I followed them out to the pin oak next door, to the lot across the streets, then back again. A dragonfly darted around overhead, plucking them out of the sky. Where were the nighthawks? They would have been so happy.

As I write this, Rachel has just called me over to the goldenrods in our front yard. They are flowering at last, buzzing with wasps, soldier beetles, flies and bees. When the goldenrods flower, it must be almost September.