Saturday morning, earthworms at Maple Grove Forest Preserve reclined on the surface of the churned soil under a canopy of wild ginger, the air saturated with water vapor. 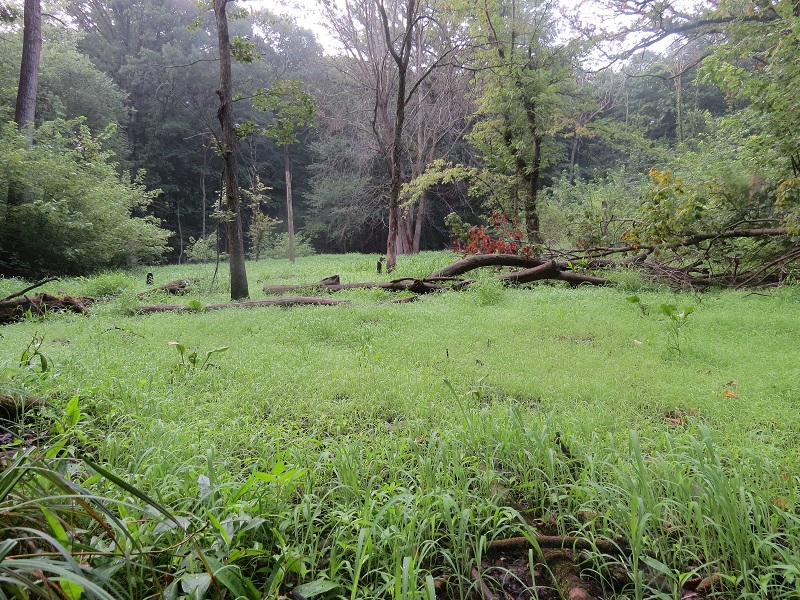 Saturday morning, earthworms at Maple Grove Forest Preserve reclined on the surface of the churned soil under a canopy of wild ginger, the air saturated with water vapor. There were no clouds in the sky, but the air was murky, and the sun crested over the trees as orange as if it were coming at us through dense smog. A few widely branching Verbesina alternifolia were flowering in the sea of touch-me-not and wood nettles that fill the St. Joseph Creek floodplain. A red-eyed vireo was calling and the crickets were wrapping up their night’s work as I arrived at the woods.

In the past 10 days, jumpseed (Polygonum virginianum) fruits have started to ripen: about one third of them will snap off when you shake the plant roughly (which I hope you don’t). Honewort (Cryptotaenia canadensis) and lopseed (Phryma leptostachya) are nearly ripe as well: they can easily be gathered by hand, though they don’t spring off readily at the touch. Beggar’s-lice (Hackelia virginiana) fruits are almost ready to go. I brushed past numerous plants Saturday morning and found at the end of my walk a single spike stuck to my pants. I’d guess that within a week or so, it won’t be possible to get through a walk without picking up substantially more hitchhikers. Bottlebrush grass (Hystrix patula) has dropped half of its spikelets. False nettle (Boehmeria cylindrica) inflorescences are bristling with achenes. Doll’s-eye berries (Actaea pachypoda) are fully ripe now, filled with pulpy flesh and chestnut-brown, wedge-shaped seeds. I tend to a nibbler while I’m out walking, but I’m glad I didn’t with these… I’d forgotten until I got home that they are toxic. Japanese barberry (Berberis thunbergii) is festooned with little green berries, soft agrimony (Agrimonia pubescens) is shedding its bristle-margined, crownlike fruits, and the wild leeks that I have been watching all year have finally started fruiting. They are so patient! All those weeks underground after photosynthesizing and dying back, only to flower for a few days and then fruit.

In the middle of the forest preserve there’s a wet depression ringed with Carex grayi and C. lupulina, with big clumps of rice cut grass Leersia oryzoides. A few individuals of water plantain (Alisma subcordatum) are in fruit along the edge, producing what look like little cheese-wheels of wedge-shaped achenes. Others, however, are sending up asparaguslike shoots that I presume will produce a second flush of flowers. Do they do this all through the summer? Surrounding them, filling the opening in the woods, is a carpet of delicate grass seedlings. It is exquisite. I don’t know what this grass could be, but as soon as I stepped into it a few feet, I regretted having sullied the otherwise perfect carpet. The grass appears to be an annual, otherwise the marsh would be a forest of it all summer long. I should know what this thing is. At the edge of the depression, clearweed (Pilea pumila) is flowering. Craneflies and skippers were patrolling the margins of the marsh as I walked through.

Calico aster (Symphyotrichum lateriflorum) is branching in the woods in anticipation of autumn. Moonseed (Menispermum canadense) is looping over fallen logs. The lovely purple sheaths of Carex woodii have paled as the leaf blades have elongated. Carex radiata clumps are flattened to the ground. The wet forest sedge Carex tribuloides is sending up shoots from its nodes, endeavoring to spread around the woods. This is a nice trick that is unusual in the genus, which mostly lacks specialized stolons, but found in this species as well as the closely related C. projecta and a distant cousin from California, C. harfordii. The common white bear sedge (Carex albursina) has aged remarkably in the past few weeks. Its leaves are tattered and darkened, much as they look under the snow in midwinter, and etched with whitish leaf-miner trails. The mayapples (Podophyllum peltatum) have all but given up: some are still yellow, others have withered altogether.

There are a few new beauties in the woods. Great blue lobelia (Lobelia siphilitica), northern bugleweed (Lycopus uniflorus), and mad-dog skullcap (Scutellaria lateriflora) have come into flower. Artist’s bracket (Ganoderma sp.) and one of the gilled mushrooms (possibly Oudemansiella megalospora, according to a colleague) have emerged. Throughout the western suburbs, bur oak (Quercus macrocarpa) acorns are swelling and look as though they may be ready to drop within the next two weeks or so.

By midday, the moisture had largely blown away, and by evening temperatures had dropped into the 70s. Rachel and I sat outside with friends and ate and talked, lit a fire, watched the moon and stars shining. I imagine the earthworms were back out in force.