Tuesday morning, I sat outside at an hour before sunrise and heard only the cardinals singing against a quiet pulsing of crickets. A nighthawk flew overhead. Monday had been the same, and yesterday as well: cardinals whistling, a downpour 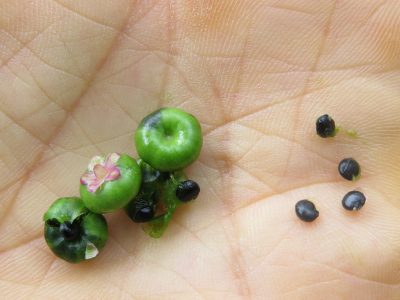 The I occurs in philosophy through the fact that the ‘world is my world’.
— Ludwig Wittgenstein, Tractatus Logico-Philosophicus 5.641, transl. C.K. Ogden

Tuesday morning, I sat outside at an hour before sunrise and heard only the cardinals singing against a quiet pulsing of crickets. A nighthawk flew overhead. Monday had been the same, and yesterday as well: cardinals whistling, a downpour, then again cardinals, and no robins. How is it that I am finding only at the age of 47 that the cardinals replace the robins in the early mornings of late summer? Are the birds behaving differently this year? I doubt it. There are just more corners of the world that I don’t know than that I do. Many of them are quite obvious and right in the neighborhood.

In the East Woods, White oak (Quercus alba) acorns are starting to fill out. They have grown to about marble size under their nobby caps. Pin oak (Q. palustris) acorns are also swelling up, though they are barely larger than chickpeas with caps that just cover their scalps. Black walnuts hang thick on the trees (Juglans nigra; for a great individual close to the visitor center, check out accession 572-30*1, south of Parking Lot 2). Solomon’s seal (Polygonatum biflorum) fruits have darkened in the past week to a waxy bluish-green. Three dark lines running lengthwise from stalk to fruit tip, marking the septa between the three locules of the berry. The seeds inside are a rich, creamy color. They stand in sharp contrast to the seeds of pokeweed (Phytolacca americana): the fruits of this species are still green but bruise when you squeeze them, breaking the juice sacs inside and pressing the black, lenticular seeds against the fruit wall. Elderberries (Sambucus canadensis) have ripened in the past 5 days, and honewort (Cryptotaenia canadensis) fruits have hardened to the point that a thumbnail dents them only with difficulty. Touch-me-not (Impatiens) fruit are at their ripest, springing open at a touch. Sporophores have withered on the rattlesnake fern (Botrychium virginianum), leaving the bright green sterile blades, the trophophores, to sop up sunlight for the remainder of the season. Turkey-tail fungi are fleshy and seem to be spreading over logs, field mushrooms have unfurled like umbrellas. In the marshes, swamp milkweed (Asclepias incarnata) and boneset (Eupatorium perfoliatum) and cordgrass (Spartina pectinata) are in full flower.

At 8:40 last night, I realized that the cicadas, which had been calling while I weeded along the side of the house a half hour earlier, had given way to crickets about 10 minutes earlier than they did a week ago. Jupiter was low in the southwest, and through the telescope I could pick out three of its moons, two trailing off to the west of Jupiter, one straggling off to the east. The great Dane County naturalist Ken Wood, when he was in the Peace Corps, decades before I knew him, used to have his students sketch Jupiter’s moons over the course of a few nights to show themselves that the moons revolved around the great planet. In the car yesterday afternoon, my sons and I had discussed whether it does people any good to know about the world, or to know about other worlds. I argued that it does, and I said something vague about how knowing about other planets tells us about our own. It’s true, of course: we do learn about our world by studying other planets, and this is often the stated reason for studying the universe. Neither of the boys were compelled by this, however, nor was I. I don’t spend time studying the world primarily because of the things I can do with that knowledge. I do it because I like it, and any justification I could give you that strayed far from that wouldn’t be entirely true.

My sons came home from the park at about 9:00 p.m. and looked through the scope with me. Venus was sinking below the horizon. We found Jupiter again, and while we tried to get the planet and its moons in focus, the boys told me about their visit to the park. They could hardly contain their excitement and were talking over each other, but from what they said I believe they simply hung a hammock between two trees and took turns swinging. They appear to have had the place to themselves, and they got to watch night coming on in a park they know well, but only by daylight. It sounded lovely.

Becoming aware of any corner of the world gives you a new part of the world to love. When you become familiar with the timing of the constellations, with where the deer mouse tracks run across the road after a light snow and where the wood thrushes like to hang out in the spring, with the sounds of park around the corner after nightfall, with the birds waking up in your backyard, you build a new room in your imagination. Your love of life becomes richer. You become a little bit larger.