Behind the carpets of woodbine and the chest-high forests of nettle, the trees and herbs are packing sunlight into seeds and rhizomes, treading through the hot but shortening days of July. 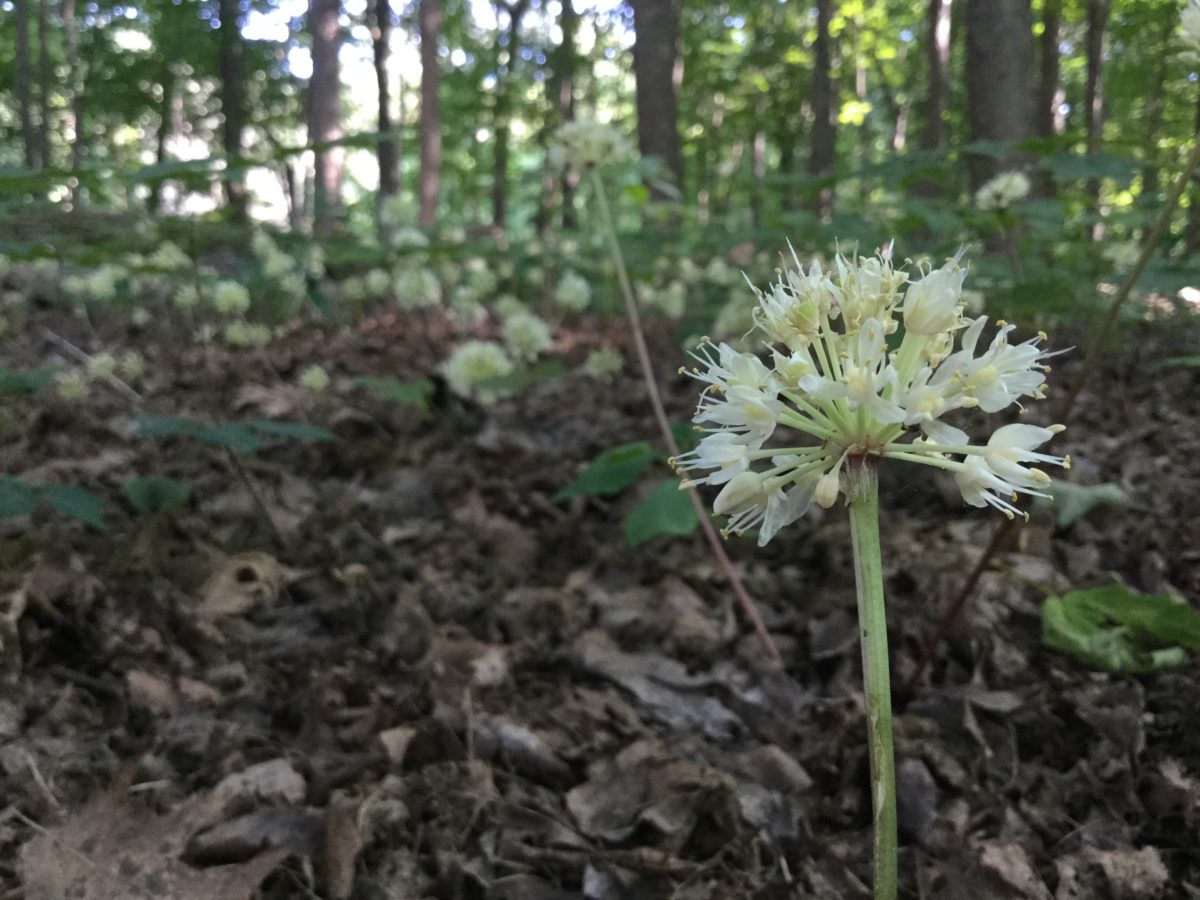 A nighthawk started calling Wednesday night at around 7:45. The nighthawk’s call, its catlike appearance in repose on the edge of a flat roof, its nimble, erratic flight low over the suburban rooftops all recall the summers of my early adulthood. Watching the bird career around after insects, I feel I am in the sky with it, thinking not of the wet meadow that must have been here 200 years ago but only of the mosquitoes close at hand. Ten minutes later the cicadas started tuning up, and their sound was soon almost all I could hear. At 8:40, the moon filtered through the branches of our neighbor’s tree and fireflies began winking in and out. At 8:55 I noticed the cicadas had stopped. All was still and the neighborhood was filled with cricket songs. The moon filled my son’s window, and he came downstairs to tell us how bright it was. My wife Rachel and I sat on the bed with him and looked out the window with him at the moon filling the sky, Mars perched just beneath it.

It is midsummer in the woods. I can go weeks, it seems, and notice hardly a change, and as a consequence I am less able to tell you when things happen this time of year than I can from mid-March to mid-June, when I can almost click off the weeks until the carices have all started to drop their fruits. Yet behind the carpets of woodbine and the chest-high forests of nettle, the trees and herbs are packing sunlight into seeds and rhizomes, treading through the hot but shortening days of July. Musclewood (Carpinus caroliniana) nutlets have hardened and are still nestled in their bracts, not ready to drop yet. Jumpseed (Persicaria virginiana) achenes are swelling inside the white flowers. Lopseed (Phryma leptostachya) fruits are reflexed and developing, not yet ready to jump from the plant. Black snakeroot (Sanicula odorata) fruits–“subglobose, abundantly beset with hooked bristles“1–are almost as large as BBs. Honewort (Cryptotaenia canadensis) schizocarps are rubbery to the touch, compressible with a thumbnail, while those of the closely related sweet cicely (Osmorhiza claytonii) are blackened and brittle, like hardened resin. Bottlebrush grass (Hystrix patula) spikelets break from the stem at a touch while hairy wild rye (Elymus villosus) is just ripening. Doll’s-eye (Actaea pachypoda) berries are about twice as thick as the pedicels bearing them. American pokeweed (Phytolacca americana) berries are beginning to form, and black nightshade (Solanum nigrum) berries are darkening. White avens (Geum canadense) bristles with long-beaked achenes. Enchanter’s nightshade (Circaea lutetiana) burs bristle up and down the slender stems. Touch-me-not (Impatiens capensis, I. pallida) capsules are turgid: some explode at the touch, others peel back only when twisted between the fingers. Blue cohosh (Caulophyllum thalictroides) seeds are chickpea-sized, hard and mostly ashen with fresh wax, some dark blue. The forest floor is littered in some places with small, aborted basswood (Tilia americana) fruits tipped with blackish styles; on the trees themselves, the fruits are as large as peas but not quite ripe. Trillium fruits have mostly fallen off, but you can still find a few attached to the plant. Cracking one open two days ago, I felt a pleasure at the whitish, slippery seeds spilling out into my palm, crested with creamy elaiosomes. I suspect that the joy I feel at a find like this an ant cannot experience. Yet unlike the ant, I can’t make any particular use of the oils nor do the seed any good by planting it. Aesthetic experiences, often momentary, may reset a mood, adjust a course, derail the most cautiously laid plans. I suspect this sets us off from the other animals, though how could I know for sure?

Earlier this week I stopped by Maple Grove Forest Preserve and found the wild leeks (Allium tricoccum) that were obvious as broad green leaves earlier in the spring, but whose flowers have been mostly eluding me, illuminating the forest floor. The clones of 200 or more white, spherical inflorescences are showstoppers right now, perhaps all the more so because I’ve been waiting for them: by June 4 the leaves were almost fully back, a full seven weeks before I found the plants in full flower. Flowering scapes started to emerge at around that time, and I had expected to see colonies of flowering scapes as I walked the trails, just as I had seen colonies of broad leek leaves in my walks this spring. And I have noticed floral buds lurking at the bases of ferns and poison ivy around the woods, relatively inconspicuous. But the inflorescences now are outstanding and worth a trip just to see. I don’t know how long they’ll last. On the west side of the woods, some have already gone to fruit.

American bellflower (Campanulastrum americanum) is stunning right now, a single style snaking out from the white-target center of each blue flower. Burdock (Arctium) is in bloom, stigmas presenting pollen to the bees, purple disc flowers tipping the swelling bur, surprisingly lovely. Also unexpected, at least to this naturalist, are the tiny white flowers of beggar’s-lice (Hackelia virginiana), best known (and named, with disrespect) for its persistent, crownlike burs, which are just beginning develop. A few of the flowers, however, persist, and they are a treat, delicate, 5-petalled jewels, in diameter about the size of a lesser duckweed frond, with slightly off-white nectaries ringing the bases of the petals. Nimblewill (Muhlenbergia schreberi) has come into bloom and started filling up grains along open trail edges while I wasn’t watching. False nettle (Boehmeria cylindrica) is packing its stiff inflorescences with flowers while wood nettle (Laportea canadensis) is airing its lacy ones. White cutgrass (Leersia virginica) has come into bloom in shaded sloughs, and at the Arboretum its leaves host a scale insect of some kind that is producing plumes of extravagant white waxy cotton. American spikenard (Aralia racemosa) is blooming. The woods are filled with head-high sunflowers (Helianthus strumosus, H. decapetalus) and sweet Joe-pye-weed (Eutrochium purpureum).

In the face of all this new growth, however, the woods are turning towards autumn. White snakeroot (Ageratina altissima, which I learned as Eupatorium rugosum) has started to set out white flowers. The late-summer-flowering white lettuce (Prenanthes alba) and elm-leaf goldenrod (Solidago ulmifolia are in floral bud. Calico aster (Symphyotrichum lateriflorum) is spreading in advance of blooming. While some of the spring herbs are still bright green–wild ginger (Asarum canadense) and bloodroot (Sanguinaria canadensis) look as happy as I’ve seen them all year, the latter with leaves swollen to the size of a bass-player’s hands–Geranium maculatum is becoming yellow and lax. I found a ripe mayapple the size of a fresh black walnut on the ground in the East Woods Thursday morning, lying along a trail where the plants were mostly yellowing and buckling at the knees. This year’s leaves on white bear sedge (Carex albursina) are hardening up for winter, and the foliage of C. woodii, which emerges perfectly erect in the spring, is now arching like tufts of hair, resembling a giant toupee spread across the forest floor.

Many species are showing marks of insect damage. On the midribs of touch-me-not leaves (Impatiens capensis), translucent swellings conceal larvae of the gall midge Neolasioptera impatientifolia, which grows as a tiny yellow larva inside the gall. Other leaves are riddled with leaf-miner tunnels, while still others are criss-crossed with slime trails that I might have thought were left by slugs or snails, but that show no evidence of chewing or scraping damage. A Smilax ecirrhata hides a leaf-rolling spider. I came across a hermit flower beetle almost as large as the terminal joint of my thumb in Maple Grove Forest Preserve on Friday. It was moving slowly, and when I picked it up by the sides it stood stock still. At first I thought it was merely playing dead, but as I held it its right mandible quivered seemingly uncontrollably, and it seemed unable to move. I set it down and it did not race away, but cocked its head forward as though to wash its face, then stumbled away with no obvious aim. It faltered on a twig, rested under a leaf, ambled out over bare soil toward the trail. Is it closer to the elm-leaf goldenrod’s stage of the year, or the mayapple’s? I feel less kinship with beetles than with flowering plants, and I’ve little intuition about this question.

Last night we sat outdoors with friends as the sun was setting and watched Venus slowly burn a hole in the western sky. Jupiter shone bright in the south soon after and Saturn perched to the left of it. An hour or so later, Mars rose in the southeast, and then the moon. We talked about injustice and parenting, about what a meaningful life looks like, about fire ordinances. We talked about where all the summers go, about where this summer has gone. The days are 45 minutes shorter now than they were on the solstice, and already I feel fall is around the corner. But the plants have a lot of energy left to pack away before snowfall. There will be plenty more to see next week.

1 From the description of Sanicula in Wilhem G and Rericha L. 2017. Flora of the Chicago Region: A Floristic and Ecological Synthesis, p. 1007. Indiana Academy of Science, Indianapolis.