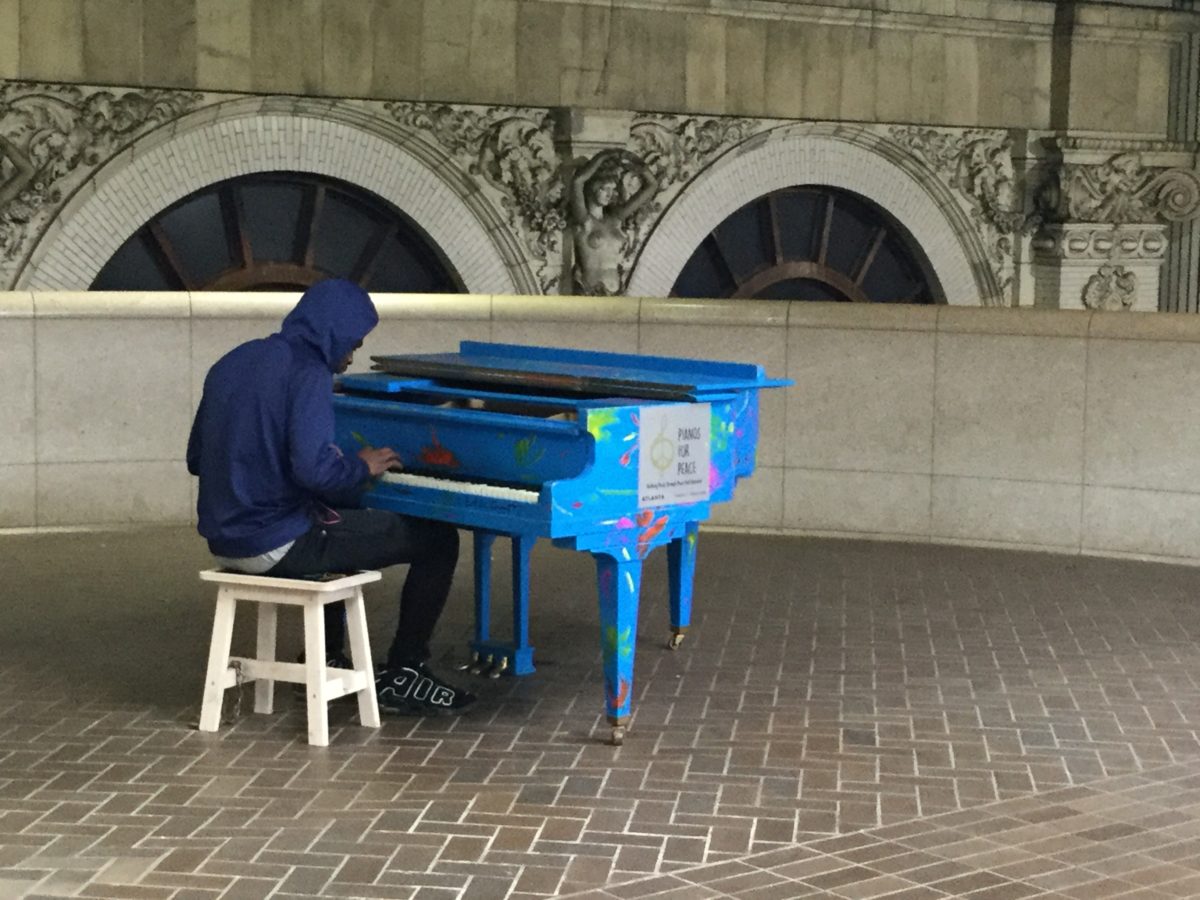 Friday morning, my wife Rachel and I awoke in Atlanta, where we’d flown for the National Science Teachers Association meeting. I spent the morning listening to talks and exploring the exhibit hall, which was a sight to behold. I had never seen anything like it. One vendor was leading teachers and students through a frog dissection. Another stood like a bartender behind a counter of vacuum-packed brains and squid, rats with their abdomens sliced open, skin peeled back, viscera in full glory (“Sign up here for a free specimen… we’ll ship it right to your school!”). There were thermal cyclers for a few hundred dollars and pipettes for fifty, a device that amplified electrical signals in your muscles and the action potential in a tickled Venus flytrap, human skeletons, a wall of monitors projecting images from NASA, robots, books and books and books. Outside the exhibit hall was a whiteboard where teachers had responded to the prompt, “I inspire students to…” and I was struck at how many things there are to want for your students. Dream big. Be great. Make a change for the better. Think like a scientist. Make evidence-based decisions. Break it down. Never stay comfortable. Keep going. Teaching methods are like scientific methods: there are as many variations on the same basic themes as there are individuals doing the work.

As I was just starting a session on working with students to think critically about sources of variation in ecological data, Rachel messaged me, “… come to the botanic garden… birds galore… beautiful.” Rachel is always right with recommendations of this type, and I took her at her word. I finished my session and ate lunch, caught the MARTA train to the stop that leaves off near the High Museum. When I stepped out of the station, I was hit with music. Someone was playing a console piano from the sidewalk on the upper level of the train station. The music had a percussiveness to it, an awareness of time that was outside the notes being laid down. The pianist had given up on melody and was just vamping steadily in the mid to lower registers. The clouds moved slowly past the blooms of the tulip trees high over the station. Chords filled the street.

The oaks along 15th Street leading to the garden were in bloom: Quercus acutissima from East Asia, Q. nigra and, I believe, Q. phellos from the American southeast (assuming it was not a cultivated species from elsewhere that I don’t know). Veronica and Houstonia and Viola were blooming in the lawns. At the garden, I asked where I should visit first. The tulips are amazing, I was advised, and the orchid house is thrilling: the native woods off to the right would be calming, good to wash it all down. Between the two, the woods sounded nicer to me, and I headed over the skywalk through the towering tulip trees. A tufted titmouse was calling, Carex plantaginea was in fruit, C. appalachica was greening up. A cascade ran down from a sculpture that looked like a tower yellow neon vermicelli. I would love to have seen it at night. Down trail a couple was reading.

When I returned to the station, I went in search of the piano. It was now occupied by two people talking, smoking, reclining. Their things were spread over the top of the piano. I jumped on the train and headed back downtown, where I found another piano, a blue baby grand being played by a gentleman in a hooded jacket. His playing accompanied me down the steps to my train, which I mounted and returned to the hotel for an award ceremony that evening. Rachel and I dressed in our nicest clothes and sat with scores of other teachers and their families, friends and co-workers, most there in recognition of years or decades of teaching science. All were innovating something, solving some problem in a unique way. Every educational challenge is unique, and the most particular solutions often turn out to be of the broadest interest. How do you introduce evolutionary biology to undergraduates at a strict religious university? How do you increase interest in research conducted at the National High Magnetic Field Laboratory? How do you increase research and conservation capacity in the Amazon? How do you increase students’ ability to conduct real research in aquatic ecology? The more particular the response, the broader the interest. This is the paradox of great literature and art, and it rolls over to teaching as well. You don’t have to solve every problem: just solve this one. The general applicability of a solution often arises from the particularity of its implementation.

We returned home yesterday, and I left the house for Maple Grove Forest Preserve just after sunrise this morning. Mourning doves, robins, cardinals, white-breasted nuthatches and red-bellied woodpeckers had been singing for perhaps an hour. Last night’s frost glazed the leaves and lawns, cemented the upper 1/2 inch of soil in place, skinned over the puddles and wet soil. A raccoon had left tracks along a tiny sandbar in one of the creeks through the forest, and it looked dry enough to step on. I put my weight on it and it held, but only for a moment before the crust broke and my foot went in nearly to the top of my boot. It didn’t overspill, but my boot caked with mud.

St. Joseph Creek was clear and fast-moving. Centipedes were hunting beneath the leaf litter. A black squirrel was running around the forest floor. Floerkea seedlings have gained a few millimeters since last weekend, and seedlings I did not notice this time last week are clustered near the moist protected bases of tree trunks throughout the woods. Carices in the understory seem not to have grown at all in the past two weeks: they were all putting out new shoots at the beginning of March, but today and last weekend they were frozen in midstride, last season’s evergreen leaves frosted, this year’s new shoots quiescent. Perhaps they are rallying their resources for an April sprint.

In our yard, the daffodils are pushing up through the soil. Leaves of golden Alexanders are unfolding against the mulch. A flock of 25 cranes flew north as I was sitting outside this afternoon, reading these words from Richard Fortey’s The Wood for the Trees: “For me, the poetry of the wood derives from close examination as much as from synthesis and sensibility. But I am aware that description alone does not necessarily lead to understanding.” Perhaps it doesn’t, but what more do we really have? I understand there is more than saying, “look at this.” I am a scientist, after all, and as such I want to go beyond describing to predicting. But then I think of Rilke’s Ninth Duino Elegy:

For when the traveler returns from the mountain-slopes into the valley,
he brings, not a handful of earth, unsayable to others, but instead
some word he has gained, some pure word, the yellow and blue
gentian. Perhaps we are here in order to say: house,
bridge, fountain, gate, pitcher, fruit-tree, window -–
at most: column, tower… But to say them, you must understand,
oh to say them more intensely than the Things themselves
ever dreamed of existing.1

There are the piano in the train station, the flowering oaks, the centipedes patrolling beneath the leaf litter, the human skull held aloft in the teacher’s right hand, the chimpanzee skull in the left. What stands between those two but the desire to sit at a piano in a train station and play something beautiful; to name the sedges; to dissect a frog; to peer back into our own past and forward into all the potential futures and describe what you see there, and to give it a name; to help students do the same. Is there more than that?

*** Addendum, 2018-03-19. Who better to ring in on this than John Burroughs? I think he’s on Fortey’s side. From A Sharp Lookout: “We all see about the same; to one it means much, to another little. A fact that has passed through he mind of man, like lime or iron that has passed through his blood, has some quality or property superadded or brought out that it did not possess before. You may go to the fields and the woods, and gather fruit that is ripe for the palate without any aid of yours, but you cannot do this in science or in art… all good observation is more or less a refining and transmuting process, and the secret is to know the crude material when you see it.” And he restates it thus: “Or one may say, it is with the thoughts and half thoughts that the walker gathers in the woods and fields, as with the common weeds and coarser wild flowers which he plucks for a bouquet, — wild carrot, purple aster, moth mullein, sedge, grass, etc.: they look common and uninteresting enough there in the fields, but the moment he separates them from the tangled mass, and brings them indoors, and places them in a vase, say of some choice glass, amid artificial things, — behold, how beautiful!”